Next
JP and Alex Cook

Do you ever wonder who is behind the creation of some of Jamaica Plain’s iconic murals? Today, we’re chatting with artist, Alex Cook, about what it takes to go from having an idea for a mural to making it a reality. Alex is a resident of Jamaica Plain and is responsible for five-soon to be six-of Jamaica Plain’s stunning murals.

You can join Alex and JPNDC on Saturday, September 10th to be a part of the creation of the newest mural at The Walden Community Garden.

K: Where are you from originally?

A: As a kid I grew up in Southern California but my family moved to the Boston area when I was 10. The second half of my growing up was in the Boston area. I have been living in Boston proper since 2001. Now, I live in Jamaica Plain. I live like 5 blocks from JPNDC.

K: How long have you been painting?

A: Well, I’ve been painting murals for 19 years.  I’ve been painting for 10 more years than that! I always liked making things. I always felt an inclination to build stuff, make pictures, and tell stories. I was getting a degree in painting from the University of Massachusetts and, in my last year there, I started to think: “What do you with an art degree when you graduate from college?”

K: How did you begin painting murals?

A: A friend of mine had painted a mural and I thought: “Boy, you can basically be sure that people are going to see your artwork if you put it on a wall.” I really, really fell in love with the public aspect of painting murals and immediately seeing how my artwork has an effect on people. 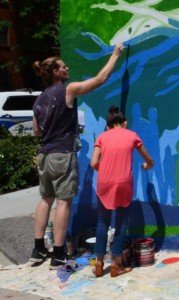 K: What’s your inspiration for the murals you create?

A: My inspiration is a lot of things. I’d say first and foremost I get so much from pictures and stories. Art is a very deep world to me with its colors and symbols. It’s a very powerful feeling to know that if I can successfully create something beautiful then I can rest assured that its going to make somebody that much happier, comfort them, or inspire them.

K: Once you have your idea for the artwork, how does the rest of the mural’s creation play out?

A: I spend a lot of time making sketches and just kind of dreaming. I’m a big listener. I don’t feel like I really “make up” ideas. When I hear something that I like and really feel, I keep that and I spend some time really exploring it.  When it comes time to putting it on the actual wall, I like an improvisational style. I don’t like sketching and then copying my sketch onto the wall. It makes the mural much more alive this way. 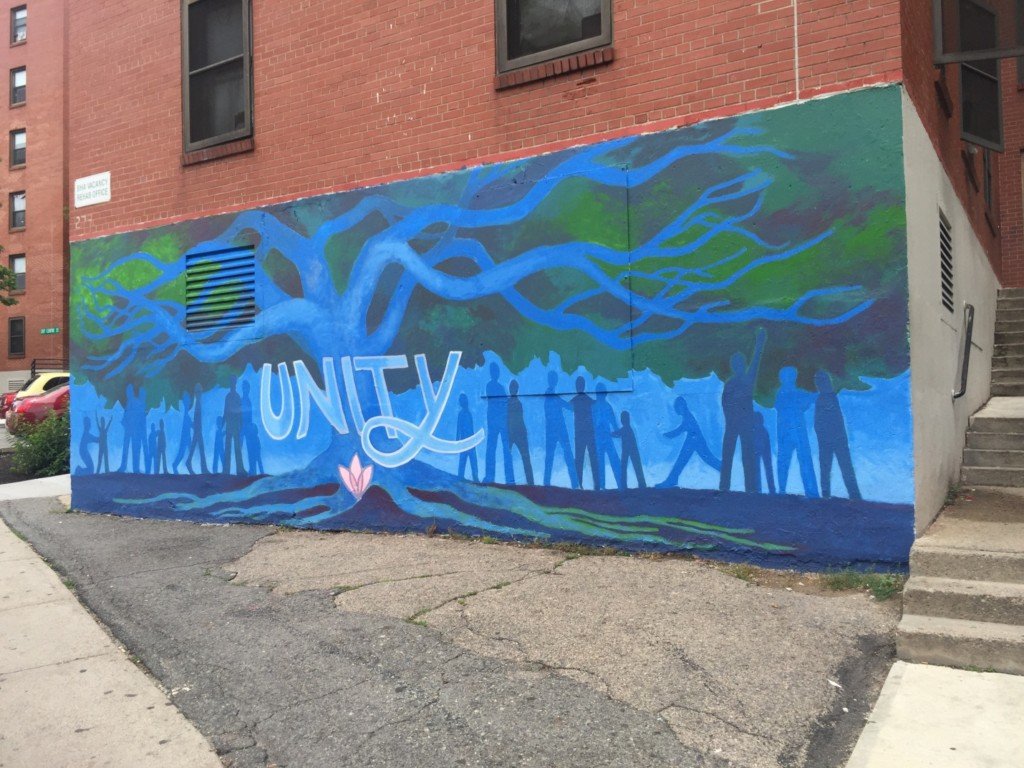 The ‘Unity’ mural at The Mildred C. Hailey Apartments

K: When you get volunteers to help you paint a mural, like the one at the Mildred Hailey Apartments, how do you manage your improvisational style?

A: It’s a different kind of improvisation. I make sure that when the volunteers arrive that the drawing is on the wall. When they arrive there is obviously a very specific structure. Over the many years that I’ve been working with students or volunteers, I have learned to make it very clear to those who may be new to this experience that there is structure. I make sure that they feel safe and they know that they can’t mess up. I never know exactly how it’s going to look!  At the end of the day, we have what we have. It’s like the people are my fingers or my hands. For a few days after the initial painting, I spend time trying to keep all the beautiful things that they’ve done but also clean up any mistakes.

A: It is! When I first started doing it, it was very uncomfortable for me. It was sometimes very hard for me to let go of the control. The volunteer’s hands create surprising elements that I wouldn’t normally think of. The mural has this neat added life to it. Over some years of practice, as long as I have my chance after the painting day is over, I feel 100% certain that I can come back make the mural really glorious.

K: How many murals have you done? How many of them are in JP?

A: I’ve done about 120. In JP there is the one across from JP Licks, one across from the South Street Youth Center, one on Dimmock Street, one at Bromley Heath, and one I painted with JPNDC last summer outside of the Jackson Square MBTA station. There’s about to be a 6th mural that I’m going to paint in September with the JPNDC. There are also a couple of murals that don’t exist anymore.

K: Which murals no longer exist?

A: I used to run a program called Art Builds Community (ABC). We’d work with teenagers and paint murals with them. ABC painted one that was on the side of the old Videosmith on Seaverns Street.  It was a picture of a woman lying on top of the skyline of the city and she had all these birds flying out of her head. Six months before that mural was painted over, it had been voted best mural in JP by the JP Gazette. If you’re going into the world of murals you kind of have to be okay with the fact that things are going to change.

K: Where else have you painted murals?

K: Now a dorky question because I am curious: Have any of your murals been incorporated into that new Pokémon Go game?

K: If you had to choose-which mural is your favorite?

A: I have a few favorites and for different reasons. In one way, the ‘Welcome to Jackson Square’ mural is a favorite because of the location. It’s seen by lots and lots of people. My favorite mural, because of the image, is the one that I did in Roslindale. It’s blue and green. It’s a pile of animals.  I like making images that are poetic and mysterious. I like when someone looks at a mural and thinks: “I don’t understand what that is!”  Murals like that are always more interesting to me. 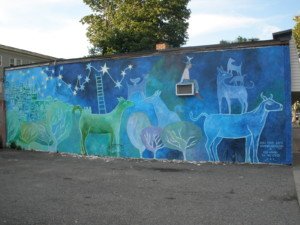 One of Alex’s favorite murals in Roslindale

K: Thinking about the Jackson Square mural, what kind of input did you receive from the residents you spoke to about it? How did you use that feedback to create the mural?

A: My favorite thing that came out of talking with the residents was the phrase: “We are family.” It is so simple and powerful. It grew out of the specific history of Bromley Heath, but it’s so quickly universal and so welcoming. It was a perfect visual balance for the words ‘Welcome to Jackson Square’. I think it is the heart of that mural. All of the images incorporated are informed by the feeling of family- the gardening, baseball, neighborhood, musicians-they all take on a deeper feeling of love and inclusion because of that phrase.

K: What is your next project?

A: My next project is a mural at a place called CIC in downtown Boston. It’s going to be all four walls of their lobby. My next mural in Jamaica Plain is going to be at The Walden Community Garden in Jackson Square on Saturday, September 10th. 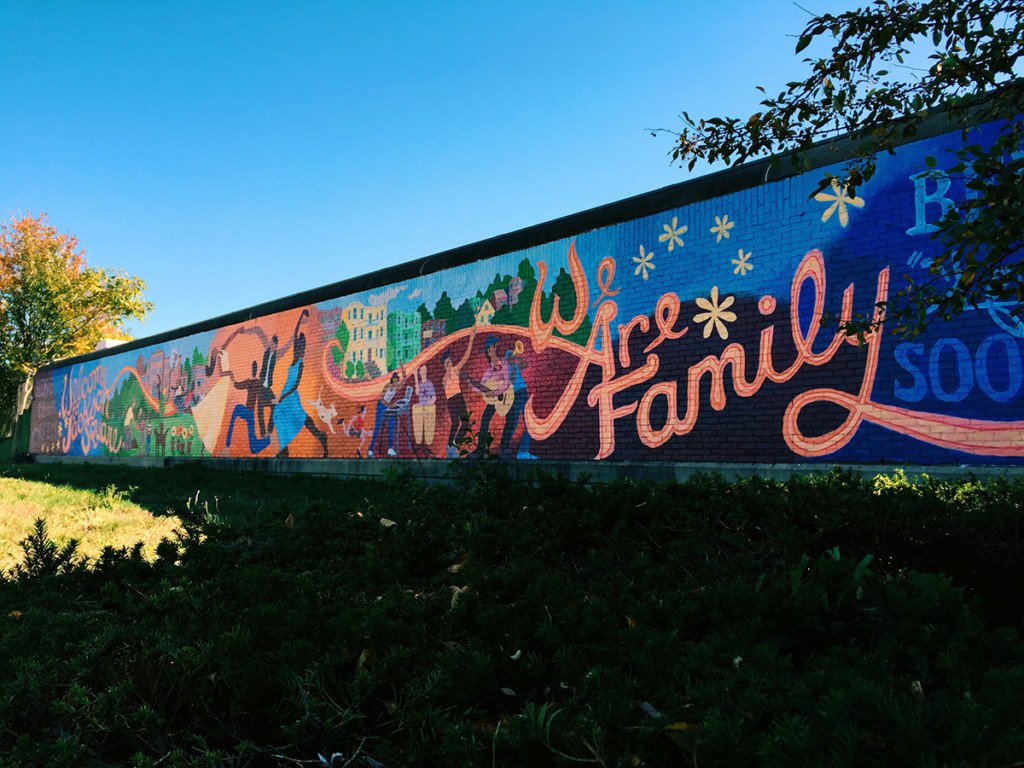 ‘We Are Family’ mural outside of the Jackson Square MBTA Station

Learn more about Alex and see all the great work he does at: