Did you know half a million pretzels are made in Jamaica Plain every year? Today we are chatting with Linda DeMarco, owner of Boston Pretzel Bakery, which is located in The Brewery Small Business Complex. You can check out the bakery and try one of Linda’s delicious pretzels at Bash at The Brewery on Saturday, June 17th!

K: Where are you from originally and where do you live now?

L: I grew up in Avon, Massachusetts down in the South Shore. I lived there most of my life. I’ve lived in the South End and now I live in Quincy.

K: Do any of your staff live in Jamaica Plain?

L: I have about three staff members that live in Jamaica Plain and one lives in Roslindale. Everyone lives in the area.

K: How was Boston Pretzel founded? 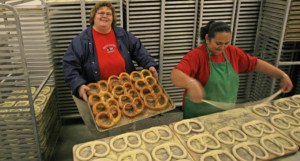 L: It started off as Boston Soft Pretzel. A gentleman opened a business here at The Brewery called Boston Soft Pretzel. I came here at the request of his wife to check out his accounting because he was behind on paying bills and whatnot. I was a financial consultant at the time and did a lot of bookkeeping. He was pretty far behind on a lot of stuff. He didn’t want the company anymore and he offered it to me. I negotiated with JPNDC and the IRS and I ended up purchasing the business. I changed the name to Boston Pretzel Bakery in 1995.

I was young and had been working at another company for a long time. I decided to go off on my own. I was in the process of trying to find my own company and I kept finding franchises. Franchises are not your own company. So when this opportunity was presented to me I took advantage of it. I did the due diligence of making a business plan. I went to the Small Business Association and went to SCORE. I did the whole nine yards. Fleet Bank gave me a small business loan and I was able to buy the business and put some money into the place. I changed it up a little. He only did pushcarts so I changed it to a wholesale bakery servicing larger accounts. It kind of fell in my lap but I did put  a lot of work into it. I’ve been here in The Brewery for 21 years.

K: How many pretzels do you make in 1 year?

K: What was The Brewery Complex like when you first started shop here?

L:  It was completely different at The Brewery when I started in 1994. There was hardly anybody else here. Sam Adams was here and they were so small. They were just getting started. JPNDC had their little office over near Building P. There were some little places like Aborn Lock and Kenyon Woodworking on the Germania Street side. On the Amory Street side there was nobody. It was a huge parking lot. There was a metal gate that, when we came in the morning, we opened and when we left at night we closed it and put a padlock on it. The parking lot was just one big sand hill. It was actually heaven for us because there weren’t a million people like there are now!

I also knew the neighbors more. Now the area has become so gentrified that we don’t know many of the neighbors. The neighbors used to smell the fresh-baked pretzels in the morning and come over. We would give them away to the kids while they were waiting for the buses but now there aren’t any bus routes out here. The neighbors used to watch out for the pretzel truck and wave at us. It was completely different even though it was just 20 years ago.

My space was actually bigger then. I gave up half of it for Bikes Not Bombs and I gave up the roof for Tony Williams Dance Center. The space we’re in now is half the size of the original space. I really wanted to help the JPNDC and I wanted to help the community grow so I reconfigured the business to work in a smaller space.

K: What are some of your favorite things about being a small business owner in Jamaica Plain?

L: Being in The Brewery is different from being a business anywhere else in JP. We all look out for each 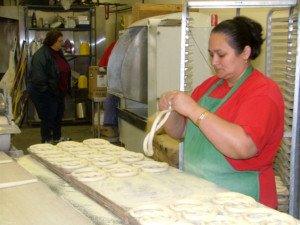 other. JPNDC’s building management is always looking out for you. If you were in a big building somewhere else I don’t think the landlord would look out for you. Being part of a neighborhood development is really a special thing but you have to give back in return. I always look out for my neighbors. I feel like I am part of something and I am not just on my own. I feel like we have each other’s backs. I remember in the crash of ’08 it was really difficult around here. The JPNDC was very supportive and they helped me get through the tough times. It’s good to be a small business at The Brewery because you’re a part of the neighborhood.

K: What would you like to see for the future of small businesses in Jamaica Plain?

L: JP does a really good job of not letting large corporations come in. They already do that so I don’t want to change that. I think Egleston Square has really come a long way. When I first came here you did not go to Egleston Square. I have employees that live there. I think it’s good that they are trying to keep it non-commercial but you can see with all the development on Washington Street that it’s going to become more difficult. It’s like every open space people see they build a building. My commute from Quincy used to take 15 minutes and now I’m going on 45 minutes because of all of the construction around here. It’s because of all the development.

I think as long as JPNDC keeps its identity and keeps small business here it kind of forces the identity of JP to stay small. I’m hopeful for JP. If JPNDC stays around with their mission and has the backs of small businesses then we will be able to keep people like me who have 10 employees who all live around here. 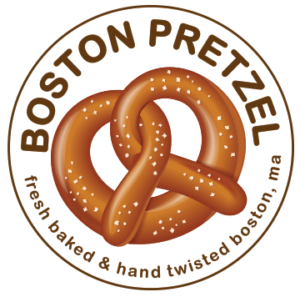 You can learn more about Boston Pretzel Bakery at: