Who was a Food Network addict? Who studied architecture? And who abandoned the world of high finance?

Javier Amador-Peña, Gerly Adrien, David Lindsey and Kelsey Munger all took unique paths to business ownership. And what they are building together is also unusual. Daunted by high commercial rents in Jamaica Plain, they’re combining forces in a “mercado model”: sharing space, labor and other costs while maintaining separate entities.

JPNDC is excited to be a part of their story as they prepare to open Monumental Market, a 100% nut-free coffee, pastry and ice cream shop in the Monumental Cupcakes space on South Street. They’re the first—and we hope not the only—entrepreneurs who are joining forces to keep Jamaica Plain a place for unique, independent small businesses that reflect the diversity of our community.

Hear some of Javier’s, Kelsey’s and Gerly’s stories below.

Want them to open this summer? Check out their Kickstarter campaign! 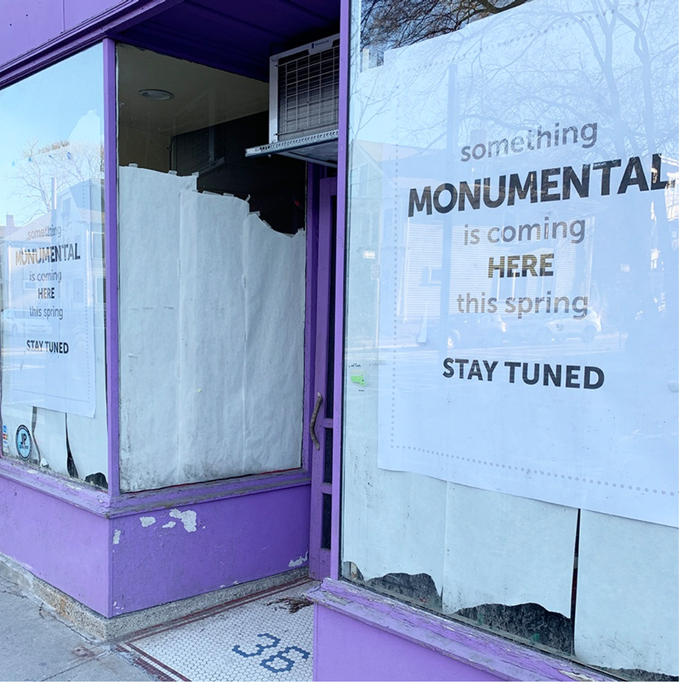 Gerly: Since I was 10 years old, I knew I was going to be in business. Black Enterprise was one of my favorite magazines. I would always read the Top 10 list and I would say, “One day I’m going to be on that list!”

I studied management in college and went into the corporate world. It was after the mortgage crisis and I wanted to make a difference so that nothing like that happened again. But I saw it was still really all about money, and I thought, “This is not what I want to do in life.”

Javier: Being a business owner was never part of my plan. I studied architecture in Colombia, and then graphic design here in the US. I worked in graphic design for many, many years.

But then I had a personal crisis. I went through a divorce and I was just consumed by negative thoughts. I thought, “I want to be surrounded by people who love me.” That led me back home to Colombia. And it was great, but … all that love and hugging became kind of overwhelming! I needed to breathe! So I made the decision to go somewhere I’d never been, just to be by myself. And where I went was the coffee region of Colombia. I didn’t expect that I would meet all these small coffee growers and they would change my life.

Gerly: When I left the corporate world, my vision was to start a coffee shop, something that would be a true community space. But to start a new business, you need a lot of cash. So instead I started looking for an existing business that I could buy. I would look at BizBuySell.com every month to see what the possibilities were. Last April, I saw this ice cream shop in Somerville, Tipping Cow, was for sale. I was born in Somerville. So I thought, “that’s where I can make my dream a reality.”

Kelsey: For me, it goes back to my nut allergies. I got diagnosed when I was six and it was so hard. I couldn’t go out to eat. Birthday parties were a hot mess. I had to bring my own stuff!

Eventually I became obsessed with the Food Network. I loved watching and trying to do the recipes. And I realized I could combine what was now a passion of mine—to create and bake and be in the kitchen—with feeling safe.

Gerly: When I said to my fiancé, “I have this crazy idea about buying an ice cream shop,” he loved it. David loves the same things I love—business and politics! And I thought, he can make the ice cream and I’ll be in the front! So we did it. We bought Tipping Cow last May, and have since added almost 80 new flavors. We renovated and started selling pastries and coffee too. 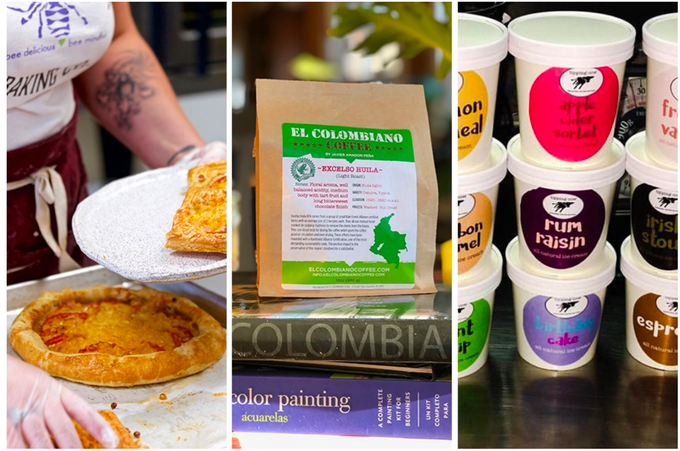 Javier: I learned about the international coffee industry. The small producers are abused. The companies will refuse the whole harvest if there’s one speckle on a bean. The farmers rely on the harvest, and if they can’t sell they lose everything that year. I thought, “I want to do business with these people.”

I did research. I looked for people to give me advice. I found a mentor. And before I knew it, this thing that I had kind of fallen into started going really well! At the farmers markets, people were saying, “Oh my god, we like the coffee so much! Where are you going to be next?”

Kelsey: I met Javier at the Brookline farmers market. I had gone right into the food world, working in bakeries, managing cafes. I got my Master’s in Gastronomy, which is food studies and food business. I started Lavender Bee in early 2018, but I still had a job baking for Brookline Grown. When they closed, I decided to do my business full-time. It was time to go for it!

Javier: I kept seeing this girl at the market. That was Kelsey. We both noticed that people would get pastries from her, and then come to me for coffee. Or the other way around. So I said, “Well, maybe there’s a way we can join forces.”

Kelsey: It really was this whole meant-to-be thing. I had literally just talked to my mom, saying, “I need to do something,” and then Javier came up to me.

Gerly: The fact that we’re all nut-free really sets us apart. I remember when we first bought Tipping Cow, I contemplated changing it. The original owner had family members with allergies, and that wasn’t true about us. But then I started realizing how many children have nut allergies. Their parents would bring them to us because we’re the only nut-free ice cream shop in New England! I would have felt bad taking that away from them.

Kelsey: Yeah, I have little girls coming up to my table with bright eyes, asking, “Can I really eat this?” It’s so sweet. Parents are like, “Oh my God, give me ALL of these cookies.”

Most nut-free things don’t taste that great because they are all allergen-free. They don’t have nuts but they also don’t have gluten, dairy or whatever. So you feel safe eating it – but maybe you don’t want to. 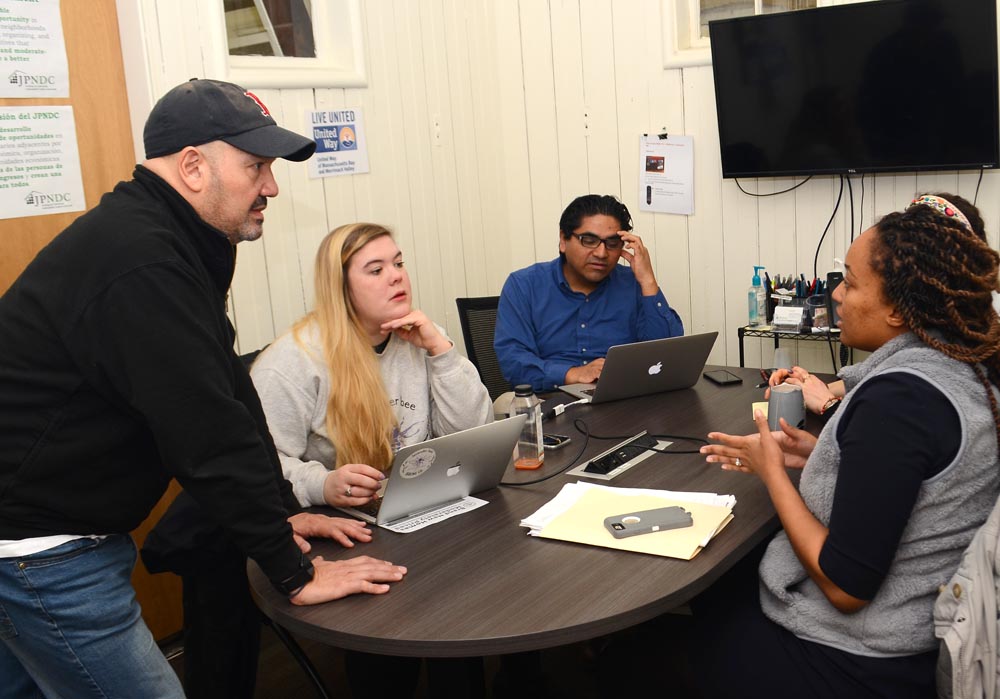 Gerly: We wanted to add baked goods, and a friend of ours told us about Lavender Bee. She was worried we wouldn’t be able to handle a bakery on top of ice cream! David reached out to Kelsey and we started buying from her. And some of our ice cream adds pieces of her cakes, cookies and brownies.

Javier: So much happened because of different small business owners talking to each other, sharing information. At the Egleston Farmers Market, I met Ammy Lowney. She was on her way to opening Juicy Greens on South Street in JP. Her advice was, “Call this guy at JPNDC. He’s really, really determined, and you will be in good hands!”

Today I say a lot that my business middle name is “JPNDC” because I hardly do anything without consulting with Carlos [Espinoza-Toro, JPNDC Small Business Services Director]. He has helped me in every way. He sees things from an objective point of view. Sometimes he’s the devil’s advocate, which I need.

Kelsey: Javier brought me to JPNDC. I had set up QuickBooks for accounting but for a year I had no idea what to do it with. Carlos helped me completely organize everything and got me in touch with amazing resources including accounting and legal help. I have also taken finance classes at JPNDC.

Gerly: Tipping Cow was of course an established business and already successful, but JPNDC’s been amazing. They were like a project manager on the whole sale, which was a lot more complicated than a typical sale because of bringing three businesses into one space. David and I meet with Carlos every week to go over our finances, and it’s been great to have somebody who’s a sounding board, someone to analyze things with.

Kelsey: It’s been such a whirlwind. There’s been hardly any time to really process anything! But we all support each other. It’s an ideal situation where we each can have our own product, and the products complement each other, and we can also support each other on this big venture. Now that’s it’s real, it’s so exciting!