“My dad and I kind of butted heads. So when he told me, “All you need is scissors and a comb and you can go anywhere and make money,” I told him that I would never do hair!” (Lena Vinnitsky, right)

The owners of Vinndio Salon are passionate about making people look their best. Today we’re chatting with Lena Vinnitsky and Julie Dion (left) about their unique road to being business owners and how JPNDC helped them make it happen.

How did the two of you get into hair styling?

Lena: I came from Ukraine when I was 11 and my dad has been doing hair at home as long as I’ve been alive. He would cut hair for Russian immigrants who couldn’t afford to go to a salon and I sat in the kitchen and watched him.

My dad and I kind of butted heads. So when he told me, “Let me teach you how to cut hair. All you need is scissors and a comb and you can go anywhere and make money,” I told him that I would never do hair! Being a hairdresser was the last thing we needed because we grew up so poor. I told him I was going to be a doctor.

But then I went to college and, surprise, I started cutting hair in my dorm. I just picked up scissors and fell in love with the transformation aspect of hair cutting, with how much people feel better when they look better. I studied psychology so it really fit my calling. Then when I decided to do hair, I decided I had to learn from the best. I went to Sassoon and ended up working there for ten years.

Vidal Sassoon was really inspired by art deco architecture and the Bauhaus movement. He began to use geometry to create shapes utilizing people’s natural bone structure, features, growth patterns and textures of hair. He started cutting hair short instead of just pinning and tucking and nipping and curling. He freed women from having sleep standing up after getting their hair set!
So at Vinndio we follow that approach. When you see one of our haircuts walking around, it will catch your eye! It’s different. It’s flattering. It’s harmonious. So we’ve been getting a lot of new clients locally just from word-of-mouth. And, of course, Yelp reviews and Google reviews. We have a five star standing.

Julie: I remember that after my babysitter French braided my hair, I was obsessed with learning how to French braid. In middle school, I was cutting friends’ hair in school, taking my mother’s sewing scissors and clippers – she used to shave my brother’s head –until she took them away from me because I wasn’t going to classes. In high school I actually got suspended for cutting hair in the bathroom instead of going to class!

One day one of my teachers said “you need to go to hair school.” And when I was a junior, a guidance counselor helped get me a grant to go to a cosmetology program at the tech school in Manchester, New Hampshire and graduate early from high school.

I started working in a hair salon in Boston when I was 18. After about two years I saw the Sassoon company on-stage at a hair show doing really creative work. I went through Sassoon’s cutting training, which took me almost two years, and then I worked there for six. That’s how I met Lena. 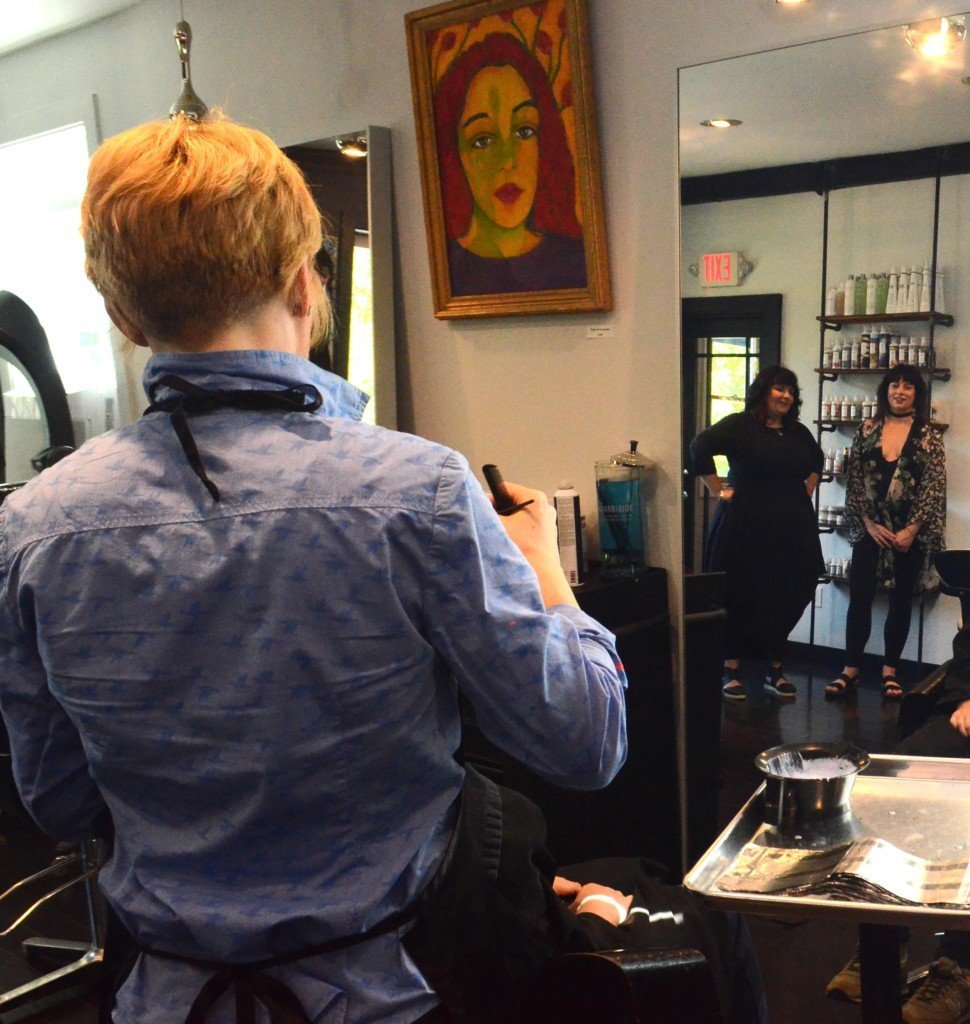 And somehow that turned into starting your own place…

Julie: There’s this saying that after you leave Sassoon, you’re always stepping down—no matter where you go. At first I thought that was BS. But after I went to a few different salons I realized that no other place inspired me.

So I ended up working out of my house for two years. I was able to run things the way I wanted to. But I didn’t feel like I was learning anymore.

Lena and I would hang out after work and fantasize about opening our own salon. Then one day we were at Chilacates on Amory Street, chatting with the owner…

Lena: …Yeah, we told him we’re both hairstylists thinking of starting our own place. He goes, “you know where you guys should open your salon? Follow me.” And he took us outside and pointed at this building.

Julie: We decided that if we get this place, we’re going to do it. It just felt right.

We didn’t bother looking anywhere else. We didn’t even have a business plan. We didn’t discuss who was going to do what. We didn’t even talk about how much money we had saved. We just decided to sign the lease and take the next step!

Where did JPNDC come in?

Lena: We heard of JPNDC from the artist who did the paintings in our space. She’s started small art projects in different cities and is a great networker. Not only did she e-mail me Carlos’ [Espinoza-Toro, JPNDC Small Business Services Director] information, but she called him pretending she was me! She knew we were so busy that it was the last thing we were going to do.

Carlos responded and we took it from there. We went to the business planning course because if you attend every class, you qualify for a one-on-one with Carlos. We ended up working with him to get our business stuff in order. JPNDC helped us with our accounting, connected us with Mayra Vargas [an accountant who frequently collaborates with JPNDC] and set up our whole accounting system. 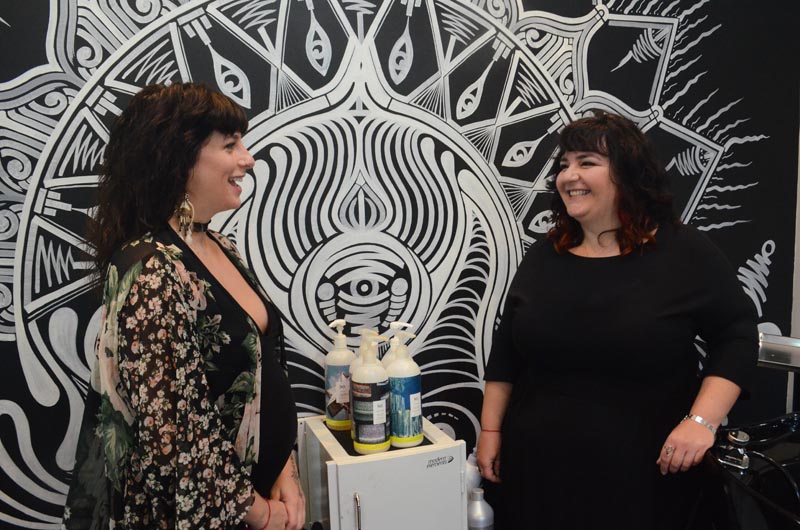 Tell me about this beautiful space you have here.

Lena: All the furnishing in here, we picked ourselves. Julie’s dad built this wall for us. Everything was so exciting, including thinking of a name (our last names put together).

Julie: Our plan is to switch out the art on the walls every year or six months. We want to support the local artist community. The artist can sell it and we don’t take a commission. It’s an opportunity for them to have exposure and hopefully make a bit of money.

Lena: It’s related to how we want our space to be different from a typical workplace. When I was in my old job, I took a trip to India that was a life changing experience. I could have stayed longer than two weeks because I had lots of vacation time, but my manager said no. And she called the spiritual classes I was taking “my extracurricular activities.” That didn’t sit right with me. I knew it was time to leave. Literally a month after coming back from India, we signed the lease.

There are Buddhist sand mandalas that take weeks to make, and then they dust it all away to learn not to be attached to physical possessions. We thought it would be really cool to have different artists repaint this wall. As the artists are painting, they know that it will be eventually painted over.

It allows us to work in a space with different energy at different times. It changes the environment in which we’re creating and keeps us inspired.