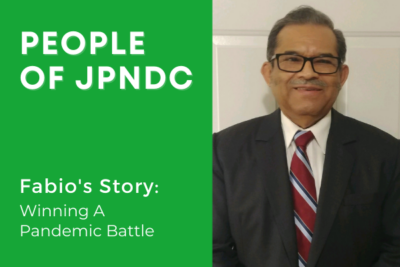 By the age of 73, everyone’s life has taken a few twists and turns. But COVID-19 has been a twist that too many people are struggling to navigate.

For Fabio, it felt like the life in Boston that he had spent decades building was falling apart.

After moving from his home country of Costa Rica at age 18, Fabio built up two businesses, a jewelry store and a soup and sandwich shop. He became a US citizen, raised four children, and earned a master’s degree in education. 20 years ago, his passion for making a positive impact led him to take a full-time position serving his church and congregation. He did everything from payroll and clerical tasks to community outreach and recruiting musicians to perform at church events.

When the pandemic hit in March 2020, Fabio was out of the country dealing with a family emergency. With the borders closed, he ended up staying away for two months. When he returned, his church had closed and he had no job.

With bills piling up, he used all his savings and maxed out his credit cards, but it wasn’t enough. He felt helpless about what to do next.

PUA got him back on his feet. But after just a few weeks, Fabio got terrible news. His benefits approval had been reversed — and he would have to repay the thousands of dollars he had already received!

Over the next months, JPNDC helped Fabio navigate a tortuous appeal process. Staff contacted state legislators to help move the case forward. He finally got a hearing. Three weeks of worry later, he learned his appeal had been approved. He received a large sum of retroactive payments, which he immediately used to pay off all his debt and bills.

“It was an unbelievable relief,” he said.

“JPNDC’s services are for the people,” Fabio reflects. “I can’t imagine what I would have done without their support throughout this year of scary situations.”

As pandemic benefits come to an end, Fabio is working with JPNDC Career Coach Enrique to find employment in the human services field. Yet most openings, as older job seekers know, target younger demographics. When his church reopens this fall, he hopes to return to his old position. “I enjoyed every day there,” he says. “I love serving my community.”